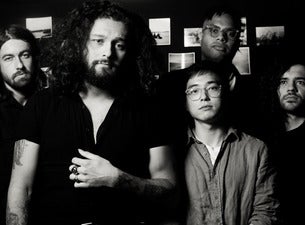 About Gang of Youths

After their electric European tour and sold out North American tour, Sydney five-piece Gang Of Youths will return home this November for their ‘Say Yes To Life Tour’.

Following the release of the 2017 ARIA Apple Music ‘Album of The Year’, GO FARTHER IN LIGHTNESS, and their immensely successful international shows, this will be their final tour for the album. The band have partnered with PLUS1 so that $1 from every ticket purchased will be donated to support Aboriginal Legal Service (ALS). ALS is an organization working with Aboriginal and Torres Strait Islander People, to provide culturally appropriate legal services, influence positive change, and increase access to justice.

Gang Of Youths recently made their U.S late night television debut with the single, “What Can I Do If The Fire Goes Out?” on Late Night With Seth Meyers and are set to grace stages as a headliner at Splendour In The Grass this July. The band have also recently attained Gold certification for GO FARTHER IN LIGHTNESS, as well as their debut album THE POSITIONS.

With their international success growing, Gang Of Youths are set to play a huge amount of festivals around the world, including Austin City Limits, Pinkpop Festival, Rock Werchter, Lollapalooza and Osheaga, in addition to being hand picked by the Foo Fighters to play their US festival, Cal Jam. Their latest single “The Heart Is A Muscle” has amassed over 3.5 million Spotify streams in the US, and appears on Spotify’s ‘Digging Now’, ‘New Noise’, ‘Rockin’ Vibes’, ‘Totally Alternative’ and ‘Rock This’ playlists.

The band are excited to soon be back on home turf for their ‘Say Yes To Life’ Tour, performing tracks voted into triple j’s ‘Hottest 100’, promising a show that is set to be an incredible celebration of great Australian music.