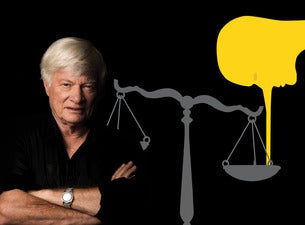 One of the world’s great minds brings it back home, to challenge fellow Australians and to explain what is happening in and to the world.

as he analyses Brexit and Trump in a post-truth era and calls for Australia’s constitutional regeneration after the bushfires. He will explain what is really happening to the royal family and to Julian Assange, how fake news distorts democracy and why the rich will inherit the earth.

This is a show that will give you an insight into Geoffrey Robertson’s life and famous cases, and his current crusade to restore cultural property to the people – including indigenous Australians – from whom it has been stolen.

Geoffrey Robertson AO QC is a barrister, author and one-time host of “Geoffrey Robertson’s Hypotheticals” on the ABC. He is founder and head of Doughty Street Chambers; now the largest human rights practice in Europe; where he has been mentor to Amal Clooney, Jen Robinson, Keir Starmer and others.

Robertson was born and bred in Sydney. A Rhodes scholarship took him to England where he is now based, and he holds dual citizenship. He is a Master of the Middle Temple and a visiting professor at the New College of Humanities. His autobiography, “Rather His Own Man – In Courts with Tyrants, Tarts and Troublemakers” was published by Penguin/Random House in 2018.

From his outspoken leadership of students in the 60s to his work fighting for the lives of death row inmates, GR’s career has been marked by courage, determination and fierce independence. He was involved in the prosecution of General Pinochet and Hastings Banda and in the defence of Salman Rushdie, Mike Tyson, Julian Assange and Lula (former president of Brazil). Among much else, he secured Yulia Tymoshenko’s release from prison in Ukraine, exposed the Medellin Cartel’s gun-running in the Caribbean and helped restore democracy in Fiji. He is credited with changing the way we think about human rights, notably through his book “Crimes Against Humanity”.