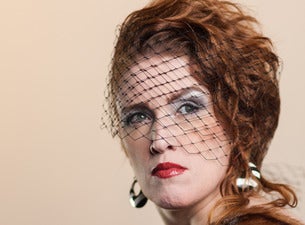 Fox: red-haired omnivorous species introduced to Australia and widely considered a pest. Adept at getting into and out of sticky situations.

Bowie is dead. And becoming a songwriter increasingly seems a crap career choice. But Quinn (The Weekly, Spicks & Specks, RocKwiz, Upper Middle Bogan) is no quitter. When your hero releases an album two days before carking it, you don’t take breaks.

‘Fox Poncing’ bends genres, twists musical and gender stereotypes and asks some hard questions about Australia’s cultural cringe along the way. But most of all it is a suite of new songs from an award-winning cabaret artist who has a frankly baffling amount of bespoke sequinned jumpsuits in her wardrobe.

Geraldine Quinn  has been nominated for almost 30 awards in the course of a decade-long career that spans Australia, New Zealand and Edinburgh.

The 1980s wasn’t all parties and side-ponytails. It was Challenger. Chernobyl. The Berlin Wall. And the best pomp in pop music history.

Gorge on 80s decadence as Quinn (Spicks & Specks) and pianist Cameron Thomas lead a crash course in apocalyptic 80s - inviting you to sing along to pretentious hits of the era.

Grab your shades. Pop your collar, You DO like Mondays; tell me why.