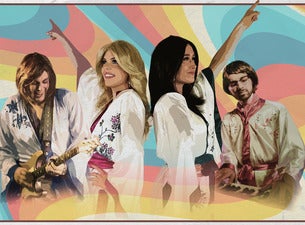 You can dance! You can jive! On this Queens Birthday long weekend, you can have the time of your life!  Gold – The Ultimate ABBA Show are back to celebrate the 45th Anniversary of ABBA’s Iconic 1977 Tour!

On February 27, 1977, Agnetha, Bjorn, Benny and Anni-Frid touched down in Australia’s Harbour City to kick off what was ABBA’s first and last tour down under.

Dancing Queens rejoice, one of Australia’s most exciting ABBA tribute shows, Gold - The Ultimate ABBA Show, is ready to bring the nostalgia and the magic of ABBA’s record breaking 1977 tour back to the stage with their brand new show not to be missed.

Featuring chart topping hits like “S.O.S”, “Mamma Mia” and “Dancing Queen”, ABBA’s 2021 reunion hits “I Still Have Faith In You” and “Don’t Shut Me Down” as well as iconic moments from ABBA’s 1977 Australian Tour, Gold – The Ultimate ABBA Show recreate ABBA at their finest!

GOLD - The Ultimate ABBA Show first landed in Australia for their “New Arrival Tour” in 2014 and since then, have performed to over 30,000 people across 80 shows, playing to all four corners of the country including packed houses at Sydney’s State Theatre and Melbourne’s famed Palms at Crown, earning a reputation as a band “that’s an inspiration to Abba itself” (Review – WeekendNotes.com).