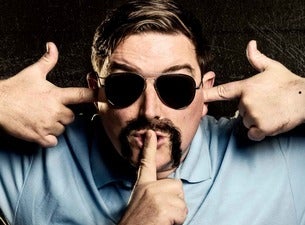 As seen on TV, Heath Franklin brings his award-winning comedy alter-ego, Chopper back to the stage, in a show that promises to pack more wallop than a swinging sock full of $2 coins.

Due to 'CHOPULAR DEMAND', the self-proclaimed 'International Ambassador of Hard' will be head-butting his way back to Queensland, Western Australia and New Zealand.

Since the dawn of time, Man has questioned the origin and meaning of his existence. Work? Relationships? Justin Beiber?

And it’s just that sort of useless fucking around that has got us where we are today, in the middle of a self-congratulatory, bargain-priced, capitalist-induced anxiety wank storm. Thats right, wank storm. Don't look it up. Chopper just invented it.

A Hard Bastard's Guide to Life is a comprehensive ‘hit-list’ on how not to just survive, but thrive in a modern world that thinks it’s better than it is. With Chopper's easy step by step guide, you'll learn how to punch Life in the guts, take compromising photos of its wife and watch it cry as it hands over the keys to your future.

With no-holds barred, and no bars to hold him back, Australia's Most Wanted comedian returns to a theatre near you for one night only.