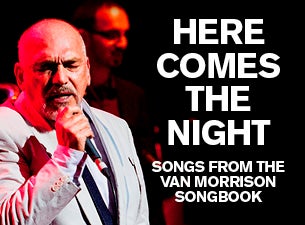 About Here Comes the Night

Following the initial success at the 2013 Melbourne International Jazz Festival and the highly successful national tour that followed Here Comes the Night – the songs of Van Morrison returns to Melbourne for two shows at Hamer Hall on Friday & Saturday 5 & 6 September.

The show will again feature the cast of Joe Camilleri, Vince Jones and Vika Bull who will be accompanied by special guests the Melbourne Symphony Orchestra along with the Voodoo Sheiks Large Band.  The combination of the Melbourne Symphony Orchestra and Voodoo Sheiks Large Band together with the wonderful cast will ensure the colour and diversity of the musical textures of Van Morrison’s Songbook are full explored.

A Hall of Fame legend of Australian contemporary rock music through his bands Jo Jo Zep and the Falcons and the Black Sorrows Joe has been a Van Morrison devotee from the first stirrings of his interest in music.  His passion for Van’s music make him the ideal celebrant of the enigmatic Irish genius.

Vince and Vika provide the range of vocal skills that Van’s music demands.  For decades Vince has been Australia’s internationally renowned  and premier jazz singer/musician and Vika’s critically acclaimed starring role in At Last: Etta James reminded fans of the soulful clarity she brought to Joe’s Black Sorrows.  She has the same exhilarating effect here.

Here Comes the Night – Songs From the Van Morrison Songbook is a concert experience that allows Van’s fans the rare opportunity to savour the breadth of a Modern Master’s extraordinary repertoire.