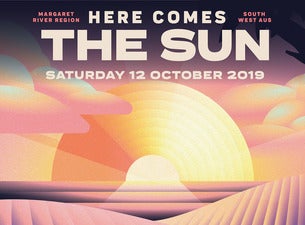 About Here Comes the Sun

As a special treat for all her fans out west, the irresistible Amy Shark will headline Here Comes The Sun as a WA exclusive. Bursting her way into the hearts and minds of music lovers with her 2016 smash single Adore, Amy is a true national treasure whose soulful voice and otherworldly songwriting keep going from strength to strength. A performer who needs to be seen to be believed, the über talented Miss Shark will be playing tunes from her wildly successful debut album Love Monster, which took her ARIA Award tally to a staggering six, and earned her millions upon millions of streams and views worldwide. Here Comes The Sun is proud to present an exclusive performance by a truly gifted artist well on her way to becoming a global music phenomenon.

In another WA exclusive, hometown heroes San Cisco will be taking a moment from conquering the world to grace the stage at Here Comes The Sun. What else can be said about this incredible band... they have risen from fresh-faced Fremantle youngsters to being one of the greatest indie-pop bands Australia has ever produced. With an armada of killer singles under their belt – from the breakthrough Awkward to worldwide smash When I Dream – San Cisco are beloved both at home and overseas for their joyous, uplifting songs that bring a ray of sunshine to everyone who hears them.

From pop to hip hop, and Here Comes The Sun breaks out another big gun in legendary Melbourne rapper Seth Sentry – who heads out west on the tail of his amazing new single Wrong One. With more awards than he has shelf space for, Seth has been a relentless force since debuting with The Waitress Song in 2009. It seems like everything Seth touches turns to platinum, with two albums under his belt that are regarded as pure Australian classics: This Was Tomorrow (2012) and Strange New Past (2015). A consummate performer and all-round gentleman, Seth Sentry is one of the best to ever do it, putting on the kind of incendiary live shows that have earned him the rightful accolade of being a bona fide Aus hip hop icon.

Also representing the best in Australian talent, PLTS (that's 'pilots') are continuing on their rise to the top, with a stop-over in WA for Here Comes The Sun. The Byron Bay three-piece kicked off the year by releasing the heart-wrenchingly beautiful Lonely Leaves EP, and continue to solidify their reputation as one of the best live acts in the country. Performing fan favourites like the soaring Without You, PLTS will undoubtedly be a highlight of the day for all in attendance – providing the kind of world class songwriting that has made them darlings of Triple J Unearthed.

Margaret River songstress Paige Valentine will prove why she is such a big hit in her hometown (and recipient of a literal handful of WAM Award nominations). The owner of a truly stunning voice, Valentine's music blends power and seduction in a way that is beyond compare, with songwriting chops that earned her a coveted finalist spot in the Vanda & Young International Songwriting Competition. Performing Here Comes The Sun in full band mode, Valentine will pair the intimacy of her solo material with the high energy of a full live ensemble.

But Here Comes The Sun doesn't stop when the bands do. After 10pm the official after-party kicks into gear with the ever popular Get Down Club DJs. Pulling out all the house classics from the '80s and '90s, Get Down Club will keep the good times rolling with a choice selection of disco and tech house guaranteed to keep the dancefloor pumping.

Here Comes The Sun is a sustainable, thoughtful and environmentally-conscious endeavour – made by music fans for music fans. Focusing on positive vibes and superlative talent, Here Comes The Sun looks forward to becoming a flagship event that will provide the highest quality entertainment for locals and visitors.