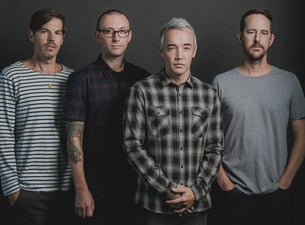 In this exclusive interview, Ticketmaster speaks with lead singer Doug Robb and drummer Chris Hesse about the band's early days, their new album Every Man for Himself, and the ups and downs of performing live.

Ticketmaster: Tell us about the backyard gigs you guys played as teens.
Doug Robb: Our first show was in my parents' backyard. It was one of those things where we "borrowed" some stages from the high school. We went on this commando mission. There were a bunch of stages underneath the bleachers at the local high school that they used for graduation ceremonies or something and we took Dan's dad's van and various friends' pick-up trucks and we went in the middle of the night and, like I said, "borrowed" these stages. We put 'em up in my parents' backyard which is not huge but definitely big enough and we set up this total full show. I remember we didn't want it to be a party, we wanted it to be like a real show so we hired security and we charged like a dollar--I don't even know what it was--but that was our first show. We had some friends' bands play and it was a really cool experience.

TM:  Some pretty well established bands emerged from these early gigs of yours.
Chris Hesse: It's funny because we have some videos of the first couple shows we did in his backyard and the guys from Incubus are there and this was like 12 years ago. Before anybody was anything we were just a bunch of high school kids who were trying to...
Doug: Support everyone else's band. We had three bands play that day and the opening band was the guitar player from Linkin Park's first band. There actually ended up being five established, signed rock bands coming out of that party...us, members of Linkin Park, Incubus, there was a band that's not together anymore called Audiovent that was there, and another band called Onesidezero. These were all bands that got major deals, you know.

TM: So you've got a new album coming out in April. How do you feel that it differs from your previous albums?
Doug: That can either be a really quick answer or a very deep question (laughs).
Chris: You wouldn't listen to the record and say "that's not Hoobastank," I mean you're gonna hear it and say that's obviously us.
Doug: It's like asking you "How have you changed? How have your tastes in food and music changed in the last three years? It has, but it's kind of hard to describe, you know? You still like a lot of the same things, but then you also like some new things and it's just...I don't know...people are just constantly evolving, hopefully. And if you're not, then you've got some problems! (laughs)

TM: How did you decide upon the final track list for the album?
Chris: We went through and picked out our favorite songs, actually. You know, it's like, I think with the first two records there was an overabundance of songs so we had to kind of narrow it down. I think with those two records we had to make sure that there was enough rock songs and enough slow songs to make a nice, even record. But with this one, we just picked our favorite songs.
Doug: I think there was definitely a handful that we felt sounded well together--had similar themes and similar feel to them. And there were a couple, not for better or for worse, but they sounded obviously out of place.

TM: Do you consider yourself more of a studio or live band?
Doug: Well, we spend more time on the road, so maybe more of a live band.
Chris: Most bands, too. I mean, if it weren't for the live aspect then I probably wouldn't be in it. Recording is fun, but you get into music because you like playing music. You like performing.

TM: What's your most memorable on-stage moment?
Chris: My most memorable on-stage moment was actually during sound-check on the Velvet Revolver tour when Matt Sorum didn't show up a few times and I'd have Slash coming up to me in the hallway saying "Hey Chris"--for one, to have him call me by my first name was just sick (laughs) and it's something I'll never forget. But he's acting like I'm doing him a huge favor saying "I'm sorry, I hate to ask you this, but, do you think you can sound-check with us?" ...I must have listened to the Appetite for Destruction record a hundred million times...so I did sound-check for them three times and they were probably the three best days of my entire life.
Doug: There have been so many some really really awesome, memorable moments on stage when I really connected with a lot of people. But the one that keeps on sticking out in my head is a really bad experience on stage. (During a popular, live televised music awards event) we were going to play 90 seconds of "The Reason" which is a simple enough task, you know. But I was not physically my best at any means. I had what ended up being pneumonia a couple months later because I didn't really take care of it. And we had this massive string of technical difficulties through that award show--a lot of the artists were complaining about a lot of different things --so it happens, especially in a live show like that. So unfortunately, I got struck with the no microphone, no monitors thing where I couldn't hear what I was saying. I have 90 seconds to do something and I can't hear a word I'm saying and it's like a boom-y, echo-y huge arena and I don't know what's going on and I wing it. I take out my little in-ear pieces and I'm trying to just wing it, and it was brutal. I was terrified--you can hear it in my voice.

TM: It's too bad that the audience at home doesn't know about these technical difficulties and they can be quick to blame the artists.
Doug: Yeah, you know what? If I were the guy at home and I saw a band on TV and it sounded terrible, I'd be like "dude, those guys suck" without really knowing what happened so I would be to blame also. It just happens, you know. It comes with the territory.

TM: So who'd do you grow up listening to?
Chris: We both grew up listening to a lot of Van Halen. Rock stuff, really. Metallica, Van Halen. I was personally really into Rush, but I think I'm the only person.
Doug: I only like two songs from Rush. I was a really big Faith No More fan. A lot of the Seattle bands. Not to bunch everybody in--but there I go.

TM: Who are you listening to now?
Chris: Same stuff.
Doug: (laughs) Lots of old Van Halen. Honestly, that's it. I don't listen to any current music really.

TM: What do you look for in a live performance?
Chris: I think there's a couple of things. It's funny, when we were out with Linkin Park a couple of years back and it was Linkin Park, us, P.O.D. and Story of the Year, I would watch Story of the Year every night because they were really really entertaining on stage. They would go nuts. They would rock out probably more than anyone I'd ever seen.
Doug: I think at that time for us, I agree, that was entertaining to watch.
Chris: That was cool, but I can also go out and watch a band that doesn't rock out at all and equally enjoy it just as much. There's something to be said about just producing a vibe when you're performing and you can just feel what the band is feeling...and you're just loving music.
Doug: I think, first and foremost, it's the music. You gotta be putting out good music. I think if you're not, then you kind of have to bring up the trickery (laughs), you know?
Chris: More lights!
Doug: (laughs) Yeah! More lights! And more exploding this and that! And act crazier or something like that. But I think that if you're nailing it on a musical level most people will get it.
Advertisement