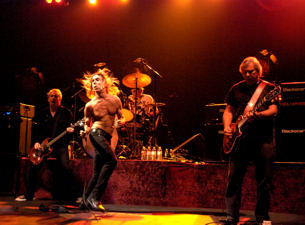 Iggy and the Stooges Tickets

“From the '60s to this moment, IGGY POP has been a solid reminder of what happens when an artist stays true to himself only and doesn’t give a damn about the rest of it … IGGY POP is the Heavyweight Champion of rock and roll.” Henry Rollins, LA Weekly, April 2012

A decade after the Godfathers of Punk reunited, IGGY AND THE STOOGES will return to Australia in March 2013 for three headline shows. Iconic frontman Iggy Pop will once again lead guitarist James Williamson, drummer Toby Dammit, bassist Mike Watt and sax player Steve Mackay into rock and roll battle.

“What some people would call antics, I would just call a good show,” Iggy Pop said in The New York Times in June 2012.

““With superlative reviews from the recent Riotfest and ACL Festivals it’s clear that the irrepressible Iggy and the Stooges are in stellar form ,” said tour promoter Viv Lees,  "I  want to urge all Australian fans to come out and celebrate the music of Iggy and the Stooges on this special headline tour as I don’t envisage that they will revisit us anytime soon.”

After witnessing this all-star band at a recent LA show, Consequence of Sound said THE STOOGES“were on point all night long, blasting through each hallowed track with a fire that made it hard to believe that many of these songs are more than four decades old. IGGY POP appeared ageless, egging the crowd on with an energy that’d be alarming for someone half his age.”

THE STOOGES formed in Michigan in 1967 – killing off the hippie era and sparking the first wave of punk with wild, primal live shows and three albums: The Stooges, Fun House and Raw Power. They disbanded in 1974, but three decades later reformed, returning songs like I Wanna Be Your Dog, No Fun, Shake Appeal, 1970, Beyond the Law and Search and Destroy to their rightful place: loud and live on stage. In 2007 came new album The Weirdness. Two years later, guitarist Ron Asheton passed away, but the band powered on with Williamson, who was part of THE STOOGES family back in the ’70s.

In 2010, IGGY AND THE STOOGES were inducted into the Rock and Roll Hall of Fame. Their influence crosses generations and the rock spectrum – from the hardcore Rollins to The Sex Pistols, The Birthday Party and Kurt Cobain.

There is no taming of this stooge. In the past year, IGGY AND THE STOOGES have fired up their incendiary sludge-rock-proto-punk-blues on stages from Austin to Brussels, Chicago to Florence.

In 2013, it’s Australia’s turn to witness the unyielding power of the Heavyweight Champions of rock and roll. Along with headline shows in Adelaide, Melbourne and Sydney the legendary IGGY AND THE STOOGES will also top the bill at Bluesfest in Byron Bay. Long may they reign.

Don’t miss Iggy and the Stooges and The Beasts of Bourbon touring nationally March/April 2013.