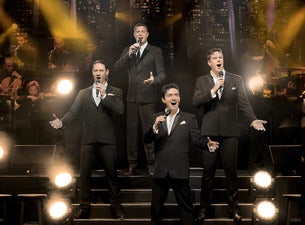 Il Divo are the world's leading classical crossover quartet and have announced the Australian and New Zealand dates for their Timeless Tour 2018!  They have performed in front of the world’s great and good – from President Barack Obama to Her Majesty the Queen. They have shared microphones with fellow superstars from Barbara Streisand to Celine Dion and their sell-out concerts have been attended by Hollywood icons including Tom Hanks and Robert De Niro.

Il Divo celebrate over 30 million album sales worldwide, with more than 50 No.1 records, 160 Gold and Platinum sales awards in 33 countries and four world tours. They sold out their Amor & Pasion dates in 2016, delivering hit songs such as Regresa a mi (Unbreak My Heart), The Time Of Our Lives, Si voy a perderte (Don’t Wanna Lose You) and I Believe In You (Je crois en toi).  The group comprises of Switzerland’s Urs Bühler, Spaniard Carlos Marín, the USA’s David Millers, and Sébastien Izambard of France.  Il Divo came together following an international search that discovered the fabulous four.  They have released seven studio albums to date, most recently in 2015.  They’re about to release another album soon in Australia!  Don’t miss them when they tour Australia this October!