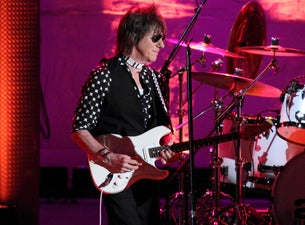 Legendary guitarist and songwriter, Jeff Beck, brings his revolutionary musicianship to Australia for one night in Hamer Hall, following a headlining Bluesfest performance.

Heralded as one of the greatest rock guitarists of all time, Jeff Beck began his career in 1966 as lead guitarist for iconic British rock group The Yardbirds, a band responsible for graduating Jeff, Jimmy Page and Eric Clapton into the world of rock’n’roll.

From these early days and throughout his career, Jeff Beck has helped redefine and influence the role of guitar in rock music. Departing The Yardbirds at the height of their success, he embarked on what has been nearly four-decades of musical exploration, leaving a distinctive mark on hard rock, jazz-fusion and the evolution of modern music.

Special guest will be the mesmerizing, blues-rock singer-songwriter, Beth Hart. The LA-based, Grammy Award nominee – with a voice akin to the likes of Janis Joplin and Etta James – recently released her eighth studio album, ‘Seesaw’, the second collaboration with blues star Joe Bonamassa and garnering a Grammy nomination for Best Blues Album.