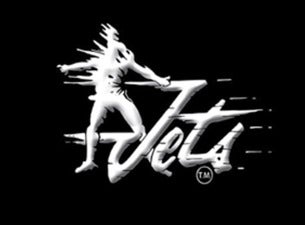 The JETS story begins in 1980 - a young man with the idea of a band playing good rock n and roll set out to shake up West Australia's live music scene. That, they did. Why has this band triumphed when so many have disappeared without a trace? Maybe the answer lies in the fact that JETS are a vigorous, energetic rock band. There's no hype, no pretence. Just honest, gut-crunching rock'n'roll. The combined talents of this four piece band results in the relentless powerhouse that is the living legend - JETS. The Jet's collective talents are one side of the story. Their production is the other. JETS are renowned for having one of the biggest full-time shows on the road, in Australia. Their eight-man road crew truck around and piece together a 200 can light show and 10,000 watt concert system at every show. The band and production combined are set to blow every audience away, every time. The Jets are a full-throttle, fire-breathing ROCK band, with a great sense of humour as well!, the energy in the room feels like the undertow of the ocean, and at the end of a show, many of the punters are like the musos, all thoroughly drained and soaked right through, as if they'd just played an exhilarating sports match......"Rik Van Der Velde"