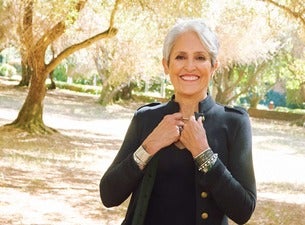 A rare opportunity to experience one of the world's great performers.  America's legendary folk singer, songwriter and activist Joan Baez returns for one concert only in Melbourne.  A musical and political force of nature whose influence is incalculable.

Her music encompasses everything from folk rock to country and gospel music.  The powerful messages, sung in her passionate, sensitive voice remain as compelling today as when they were first heard.

"Baez remains a true icon of the music world - with a performance that is powerful, tender and strident"

"Baez switched between ballads, political songs and gospel in a remarkable show that earned her a standing ovation"  ****  The Guardian Sep 2014