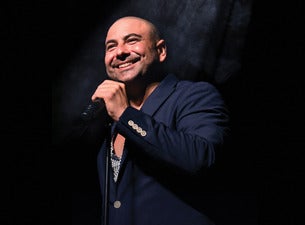 The comedian touted as Australia’s answer to Seinfeld is back with a brand new show for 2022 – and with most of us needing a good laugh after the events of the last two years, his tour will be just the ticket.

After surviving the world’s longest lockdown in Melbourne, Joe is bursting with new material, has gone slightly stir crazy, and will take his all new Live 25 show on a national tour to celebrate his quarter century of comedy. The new show is the pinnacle of his 25-year comedy career, aptly titled Show Some Respect: 25 Live. Featuring his unique brand of humour and sharp observations, and over the course of almost 90 minutes, Joe will honestly recount life as an ethnic Australian (or a wog kid as he prefers to call it), and now life as a husband and father to a newborn. Growing up in the 70s and 80s, Joe’s view on how today’s generation of kids compares to his own experiences will have audiences of all ages and ethnicities in stitches.

Internationally loved and regularly selling out shows in Canada and the USA, Joe Avati has achieved a lot in his 25 years of work. One of the country’s biggest comedy exports, Joe is the only Australian artist to have two comedy albums charting simultaneously in the top 5 anywhere in the world as well as a number 1 comedy album. He boasts record breaking, sell-out shows around the globe, has produced several successful live theatre shows, plus hosts the popular podcast A Serious Chat with A Comedian. As If that’s not enough, he is also about to release a children’s booked titled When I Was Your Age – a subject also touched on (in a very different way!) in his new comedy.

Renown for his clean performances, Joe relies on wit, human insight, and genuine comedic talent rather than risqué subjects or profanity to garner the praise he regularly receives – something rare in today’s comedy landscape. It is this characteristic that has drawn comparisons to the great Jerry Seinfeld, and Joe’s ability to appeal to multi-generational audiences sets him apart and makes this a must-see show.