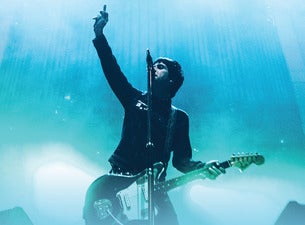 Frontier Touring look forward to welcoming iconic British guitarist and singer-songwriter, Johnny Marr, for a series of electrifying shows in January and February 2015 through Australia and New Zealand!

Having played sold out shows in Melbourne and Sydney to great acclaim earlier this year, these will be Marr’s first as a solo artist when he and his band roll in to Perth, Adelaide, Brisbane and Auckland.

As a special bonus each lucky ticket buyer also has the opportunity to channel the guitar icon himself and win a Johnny Marr signature Fender Jaguar guitar. The mighty instrument is valued at $3,500 and has a plethora of specialised features that reference Marr’s decades of experience. Simply head to www.frontiertouring.com/johnnymarr for entry details.

A founding member of cultural institution The Smiths and performer alongside the likes of Modest Mouse, Beck, Talking Heads, The The and Oasis, Marr was already rock royalty before releasing his Top 10 debut solo album The Messenger in February 2013.

‘Each tune throws up a different style, creating a one-man compilation album that rifles through 25 years of lush or edgy genres, perfecting every one…The Messenger isn’t just a summary of everything worthwhile in contemporary rock music, it’s an insightful and informed dissection of life in 2013.’ – NME 8/10

‘One quick listen to The Messenger brings all his signatures rushing back -- the intricate, intertwining arrangements, the insistent riffs finding a counterpoint in the elastic yet precise melodies, a romance with the past that doesn't negate the present.’ – All Music 8/10

In a poll conducted by the BBC, Marr was voted fourth best guitarist of the last 30 years and Phil Alexander, Editor-in-Chief of Mojo magazine described him as "arguably Britain's last great guitar stylist".

Nothing if not prolific, Marr had begun writing sophomore solo effort Playland (out October 3 through Warner Music, watch the clip for new single ‘Easy Money’) almost immediately after The Messenger’s release "…I kept on writing. I liked that the band had a momentum going on tour and a connection with the audience, and I thought that energy would be good to capture on the new record.”

Energetic, post-punk song writing complemented by Marr’s characteristic guitar licks, engaging lyrical ideas and poised vocal phrasing. Playland is composed around the central theme that “songs that move at the speed of life” and captures much of the spirit that made his debut so memorable.

Marr collected rave reviews when last in Australia with critics spotlighting his ability to combine the best of his new material with select highlights from his epic back catalogue, including The Smiths and many others.

‘This was a man honouring his legacy while still creating in the present. As the T-shirts at the merchandise desk defiantly proclaimed... Johnny Fuckin Marr.’ – The Music

He’s one the most celebrated guitarists in the world. Armed to the teeth with classics and his own lauded solo works, when Johnny Marr hits Australia and New Zealand in January 2015 the shows promise to be exhilarating displays of talent from a revered virtuoso.