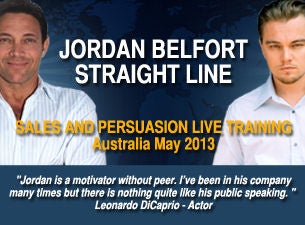 Fresh off the set of the cinematic adaptation of his international best-selling memoir, The Wolf of Wall Street, Jordan Belfort is returning to Australia in May, for a four-city tour prior to the November release of his movie, which is being directed by Hollywood-legend, Martin Scorsese, and stars Leonardo DiCaprio.

“Working with DiCaprio and Scorsese has been a truly amazing experience,” said Belfort today, from his home in Los Angeles. “Leo really nailed the role, especially some of the sales training speeches, which we worked on together for literally dozens upon dozens of hours, until he got them just right. His commitment to excellence is unparalleled. But now it’s time for me to get back to work and do what I do best—working with salespeople and entrepreneurs to help them raise the level of their games in a very big way.”

While in Australia, Belfort will be staging exclusive one-day live events, where he will be teaching his world-famous Straight Line Sales and Persuasion System. This is the first time that behavioural psychology and neuroscience have been combined with his breakthrough sales technique. To that end, Belfort will also be continuing his work with Australia-based Sales Acuity, which has been enjoying phenomenal success since their launch, in November of last year.

Belfort’s business relationship with Australia dates back many years, but his 2013 tour will eclipse anything he’s done in the past.

Belfort said, “I’m more excited than ever to be coming back to Australia, because this is the first time that I’ll be conducting full, 1-day boot camps in each major city, which will give me enough time, finally, to teach all ten of the core elements of the Straight Line System, without having to rush. I’ll be conducting trainings in Sydney, Melbourne, Brisbane and Perth.”