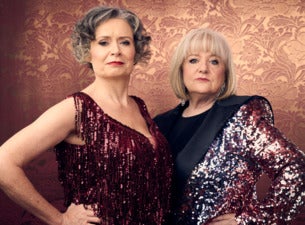 Denise Scott and Judith Lucy know what the whole country is wondering, how did they cope with a global pandemic and the endless lockdowns of the last two years? Well, it turns out they were in lockdown together dealing with the same big questions as everyone else: how many meals can I eat in one day? Do I have a drinking problem? (Specifically, if I go to the toilet in the middle of the night and on my way back to bed I stop and have a gin and tonic, does that mean my drinking problem has gotten worse? Or does it mean I'm living my best life?) Will I ever wear a bra again? Should I trim my goatee or go the full-on beard?

Join Jude and Scotty for what could loosely be called a play - think Waiting for Godot meets Flying High - that is not only full of shameless gags but sees them confronting their greatest fear. Intrigued? Don't be. Just buy a ticket.

The last time Jude and Scotty teamed up and hit the road it was 2017, a simpler time. Their critically acclaimed, smash-hit show Disappointments sold more than 70,000 tickets nationally and won the 2017 Melbourne International Comedy Festival's People's Choice Award.

They cannot wait to be back out there.

“Despite the audience’s familiarity with these comedy countesses, it still remains possible to be surprised by the filth they come out with” ★★★★ Chortle, 2022