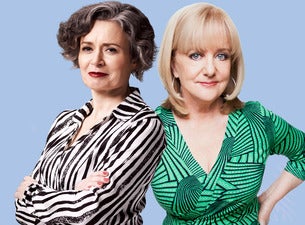 Join Denise Scott and Judith Lucy as they share their all new disappointments – anything from romance, politics and television or to the fact that Judith has started shaving her face while Scotty couldn’t be bothered and let her beard grow free.

Sydney, it’s time to get yourself set for cocktail hour or afternoon tea (or slip some whisky into some hot water and do both) and join Scotty & Jude live on stage to experience the show that promises to be at least as disappointing as the miserable bin fire that is humanity.

“We don’t know what these live shows will be. We do know that they will be loose, silly, full of disappointments and will almost certainly involve conversations about clitoris jewellery. We’ll also definitely be ‘helping’ our audience with their problems in a segment called ‘Lemons to Lemonade’ and we’ll probably be drinking. Cocktails and clitoris talk for everyone! Chin Chin!” Jude & Scotty

“Either of these performers is capable of tickling an audience pink; together, you can expect to be red raw” The Age