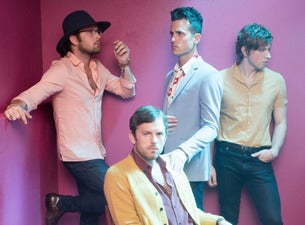 About Kings of Leon

KINGS OF LEON
TOUR POSTPONED DUE TO INJURY OF BAND MEMBER
The Frontier Touring Company regret to advise that the Kings Of Leon tour has been postponed from March 2011 to November 2011 to allow drummer Nathan Followill to recover from surgery for a torn right labrum and bicep.
Doctors have advised that at least three months will be required for Nathan to recover post surgery to ensure the injury doesn't reoccur.
The injury has, at this stage, led to the postponement of Australian and South African tour dates for Kings Of Leon.
Nathan said of the postponement, "Sorry to all the fans in Australia and South Africa. My bum wing needs more time to heal but we'll be back later this year. Sorry again".

A new itinerary is currently being secured for November in Australia and will be advised to fans this week.  Ticket holders should hold on to their tickets until further notice.
Frontier and the Kings Of Leon apologise for any inconvenience this postponement may cause fans.
For updates keep an eye on www.frontiertouring.com