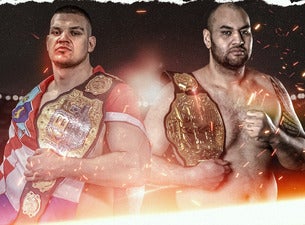 About Knees Of Fury

The main event - a Super heavyweight rematch not to be missed. Local Commonwealth Champion Brando Pericic puts his Commonwealth title on the line against the only man to ever defeat him - Big Dave Tuitupou; NZ’s super heavyweight king-in-the-ring champion. At 6’8 and 160 kg, Tuitupou is a man not many people want to fight. Pericic fought him in NZ in his second ever fight; losing a close points decision. Since losing that fight, Pericic hasn’t lost in 3 years and is officially Australia’s toughest man - winning 3 fights in one night in QLD in 2021 to be crowned champion.

The undercard is filled with fighters from WA, VIC, QLD, and NZ, showcasing the best Muaythai fighters from all over Australia and New Zealand.

With every seat experiencing spectacular views, the atmosphere in Netball SA Stadium will be electric. Kneesoffury: more than just a fight night.