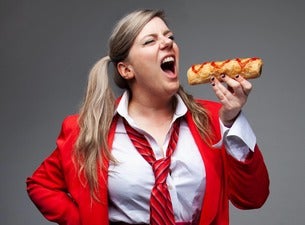 Nominated for the Golden Gibbo in 2019, Lauren Bok is back with a freshly-baked new show, golden crispy on the outside, filled with content of a questionable origin on the inside!

In order to reach 'The Top', chronic overachiever Lauren Bok has never chucked a sickie, never got a detention and never, ever paid for public transport.

When being too busy, working too hard and feeling exhausted all the time are all signs you’re doing it right, Lauren Bok reaches the top through a hilarious blend of stand-up, mime and burlesque, all to get the tasty pastry of perfection that awaits her.

'Her innate nuttiness and gift for physical comedy need to be seen live and up close. A sight to behold.' Herald Sun

'Wickedly funny stand up, she has the audience in stitches.' Pop Culture-y