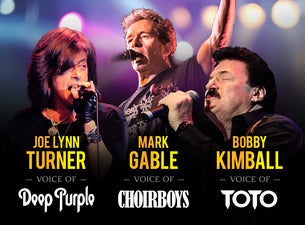 About Legend Voices of Rock Tour

Legend Voices of Rock is proud to present the incredible voices of four of the most influential and acclaimed International rock bands of the 70s and 80s with dozens of Top 40 hits and over 130 million record sales between them.  Bobby Kimball - the legend voice of TOTO, Joe Lynn Turner - the legend voice of DEEP PURPLE and RAINBOW and Australia’s own Mark Gable - the legend voice of CHOIRBOYS.  Over two hours of uninterrupted international chart topping hits that shaped the development of rock music worldwide will feature in a thrilling concert travelling across 10 cities. Tickets are limited so do not miss out.

Australia is ready to rock!

Bobby Kimball, the original front man of TOTO, with six Grammy wins and four more nominations, is one of the most recognizable voices on radio.  His soaring vocals feature on TOTO’s biggest selling hits such as Africa, Hold the Line and Rosanna as well as recent Toto hits, Falling in Between and King of the World.

The CHOIRBOYS were a mainstay of Countdown in the late 80s, with Molly Meldrum correctly acclaiming their first album was “destined to become an Aussie classic”.  He wasn’t wrong.  Run to Paradise is now an Australian rock anthem and other hits like Boys will be Boys and Never Gonna Die are destined to evoke strong memories of the 80’s.