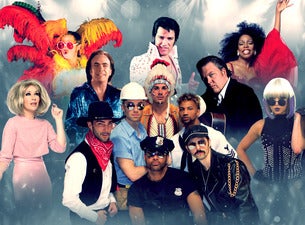 About Legends In Concert

Legends In Concert is one of the longest running and most popular shows in Las Vegas and Melbourne audiences are showing they love this show every bit as much as the Vegas fans.

For the past three years, Legends in Concert has performed in Melbourne with audiences being very vocal on who they would like to see and the organisers have taken notice. The line-up reflects the fans feedback.

Returning by popular demand for a fourth season will be Elvis Presley along with highlighting the talents of Neil Diamond, Elton John, Johnny Cash, Village People, Dusty Springfield, Diana Ross and Lady Gaga for their first time.

This high energy internationally acclaimed production takes audiences on an electrifying journey through the songbooks of these legendary singers accompanied by a live band and with talented singers, dancers, lavish multimedia theatrical sets and authentic costumes.

The tribute artists perform using only their own natural voices and are backed by a live band that rocks the house with vivacious back-up singers and dancers.

Legends in Concert made its Las Vegas debut in 1983 as an initial six-week engagement in the center of the Las Vegas Strip. It is the longest-running production in Las Vegas’ history with its flagship show at the historic Flamingo Las Vegas Hotel and Casino. Legends in Concert has entertained over 35 million fans and 2018 marks its 36th anniversary.