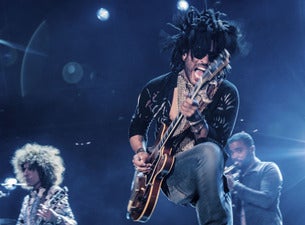 Regarded as one of the preeminent rock musicians of our time, Lenny Kravitz has transcended genre, style, race and class into an 18-year musical career, one which revels in the rich influences of '60s and '70s soul, rock and funk.

Kravitz's multiple talents as a writer, producer and multi-instrumentalist have resonated through seven studio albums into a timeless catalog, all of which have been certified either platinum or multi-platinum. From 1999 to 2002, he won four consecutive Grammy Awards, setting a record for the most wins in the "Best Male Rock Vocal Performance" category for his single "Dig In" (previously winning for "Again," "American Woman" and "Fly Away"). In 2004, he received his sixth Grammy nomination in the category for "If I Could Fall In Love" off his 6th studio album, Lenny. Kravitz's appeal has also been recognized by his peers; his collaborative efforts are as varied as his own influences, having worked with Madonna, Slash, Aerosmith, Jay-Z, N.E.R.D., Mick Jagger, P. Diddy and Alicia Keys.

A father to a 17-year old daughter Zoe, the 43-year old Kravitz's musical success has afforded him many opportunities to fulfill his creative vision beyond the recording industry. He recently created a design company, Kravitz Design, that undertakes various high-concept projects with commercial, residential and product design.

Kravitz released a new album entitled It Is Time For A Love Revolution set in February 2008.