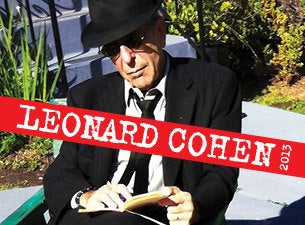 The performance scheduled for Sunday 17 November at Sydney Entertainment Centre has moved to Monday 2 December at the Sydney Opera House.

The Melbourne Rod Laver Arena performance on Monday 9 December will now take place at Palais Theatre on the same date.

Ticket holders to both shows will be contacted directly regarding their tickets and any action they may need to take.

Tickets to both new venues will be available to purchase from Monday 4 November 9am local time.

The Sydney Entertainment Centre and Rod Laver Arena concerts on Saturday 16 November and Wednesday 20 November will both proceed as scheduled.

The announcement that legendary Leonard Cohen would be returning to Australia and New Zealand for his third concert tour in five years left fans eagerly counting down the days until summer.

Following an overwhelming demand for tickets to these enigmatic performances, it is with great delight that The Frontier Touring Company can confirm second performances for Leonard Cohen in Sydney and Melbourne.

After his first Sydney performance the day before, Leonard Cohen will take the stage at the Sydney Entertainment Centre on Sunday 17 November. Melbourne audiences will also be treated to a second opportunity to see the music icon at Rod Laver Arena on Monday 9 December.

These performances join Cohen’s most extensive tour of our countries to date, travelling throughout Australia and New Zealand’s major cities as well as performances in regional towns Cairns, Townsville and Wollongong.

An artist who requires no introduction, Cohen is arguably the greatest singer songwriter of modern times. His foundations as a poet can be seen throughout his colourful and emotive songwriting, Cohen has created an anthology of songs that indulge the senses and stay with you long after the music finishes.

Since returning to the stage in 2008 after a 15-year hiatus, Cohen has lost nothing in his years off the road and his shows have quickly been recognised as musical history. Recent performances across the United Kingdom confirm that Cohen is in his best form yet:

‘This was a prayer meeting, not only for the crowd... Such is the reverence, so eager are people not to miss a beat, that they don't even sing along. Every song – all the hits, plus a handful from last year's Old Ideas – beams out pure, with a slight sibilant echo from the O2's walls’ – The Guardian ★★★★★

‘His three-hour sets are the Sistine Chapel ceiling of live performance: their exquisite beauty renders you silent, sometimes tearful but always grateful to have been able to experience such radiance and majesty. – The Telegraph ★★★★★

Don’t miss the magnetic and inimitable Leonard Cohen as he returns to Australia and New Zealand with his emotive, poignant and legendary concerts.