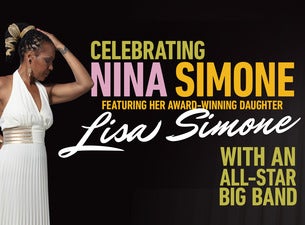 “I made a pledge to my mother when she passed away to make sure she would be remembered in the way that she deserved.”   - Lisa Simone

“A deep velvet voice, lush and powerful, just like her mother…”

It’s a new dawn, it’s a new day, it’s a new life… For the first time ever, award-winning actress and Grammy-nominated jazz vocalist, Lisa Simone, will embark on a national Australian tour to honour her mother’s legacy.

Nina Simone stunned the world with her deep, velvet voice and soulful songs, earning her reputation as one of the greatest singers of our time.  We are thrilled to welcome her daughter to Australia next March to enthral you with a swinging soulful and heart-warming concert of her mother’s music.

With a glittering show business career of her own, Lisa Simone has won the National Broadway Theatre Award for Best Actress in a Musical (Aida), performed alongside some of the greatest female vocalists of our time, headlined at New York’s Lincoln Centre and starred at many international jazz festivals. In 2008 she topped the jazz charts with Simone on Simone, and was nominated for a Grammy Award and co-produced the 2016 Oscar-nominated Netflix documentary about her mother’s life, What Happened, Miss Simone?

Expect to hear all the feel-good Simone classics like –

My Baby Just Cares for Me

Black Is the Colour

Love Me or Leave Me

Don’t miss this incredible opportunity to enjoy classic Nina Simone repertoire performed by her very own daughter, blessed with the same rich powerful voice as her mother.

Lisa will be accompanied by a swingin’ All-Star Big Band.

Tickets will sell fast so don’t wait...BOOK YOURS NOW.