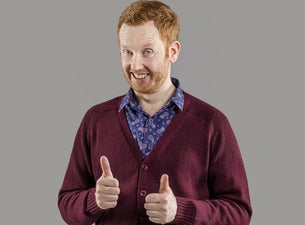 Luke’s almost fixed it… his life that is. He now has a real, actual girlfriend – something he previously thought impossible because of both his face and personality. With his new found personal security he’s now got time to worry about all the stuff that is actually worth worrying about. Like, what is actually going on in the world? And, what happens when his girlfriend realises she’s made a mistake, leaves, and tells other people not to date him?

Luke has become a genuine star of the small screen by way of his very own uncomfortably illuminating documentary series for the ABC Luke Warm Sex. He also created and starred in the incredible Rosehaven (ABC TV) with fellow comedian and real life best friend Celia Pacquola. Plus - he's had his wisdom teeth out, and will hopefully have a more powerful jawline when the swelling dies down.

“there are plenty of comedians with swagger out there, but at the moment McGregor has something better — honesty” 4 Stars, The Age