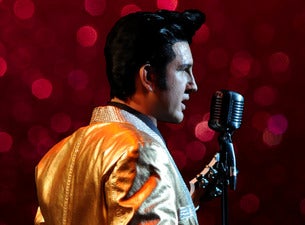 Elvis If I Can Dream

Come and Celebrate the magical hits of The King Of Rock n Roll in a sensational 2 hour Concert Spectacular.

All of Elvis” No 1 hits will be performed in the original style that made Elvis the greatest performer that ever lived.

Internationally Acclaimed sensation Mark Anthony, one of the most dynamic Elvis tribute artists in the world today, brings this unique period to life – the songs, the costumes, the emotion, the energy, the raw power – all brought together in a two hour concert spectacular. With over 600 million record sales worldwide and 3 time Grammy Award Winner Elvis Presley will always be known as “The King Of Rock n Roll”

Come and relive and experience what it would have been like to see Elvis Presley Live In Concert.

Internationally Renowned Mark Anthony who has been regarded as the very best Elvis Presley Tribute artist in the World will transport you to that very time when Elvis Presley ruled the world and dominated the record charts in the 50’s, 60’s & 70’s with his unique raw energy, dynamic voice and sensational stage presence.

“Mark Anthony is one of today’s best Elvis Tribute artists, as he pays Tribute to Elvis… It’s fun for me to watch Mark perform, because he reminds me, so much, of my old friend Elvis Presley – the Greatest Entertainer this world has ever known! Mark’s show pays tribute to Elvis for all the right reasons, and brings back memories of when we were there on stage with the Man Himself! Keep up the great work Mark… your friend in Nashville.” – Joe Moscheo of The Imperials. The Imperials toured with Elvis from 1969 till 1972 and recorded two Gospel albums with him.

Elvis The King in Concert

Internationally renowned Sensation  Mark Anthony returns with his brand new production, ELVIS – The King In Concert, recreating all the electrifying magical hits & magic of the Madison Square Gardens and On Tour performances.

Elvis’ concert years are some of the most exciting performances in music history. In 1972 Elvis returned to conquer New York City with four sold out shows at Madison Square Gardens. Performing to a record 80,000 people, this was just one of the many pinnacles in his stellar career.

The On Tour performances saw Elvis continue this success across the USA. Culminating in an award-winning documentary performance aptly named Elvis On Tour. The concert years saw him perform over 1000 shows in just 8 years and to more than 6.5 million adoring fans.

Mark Anthony is officially recognised by Elvis Presley Enterprises and Graceland as one of the top Professional Elvis Tributes in the world to date. Mark’s stage presence, incredible vocal ability and authentic costuming is backed by his amazing and energetic band. Together they bring the Elvis experience to a whole new level.

If you only see one Elvis show this year, make sure it is ELVIS – The King In Concert starring the people’s favourite the dynamic Mark Anthony!