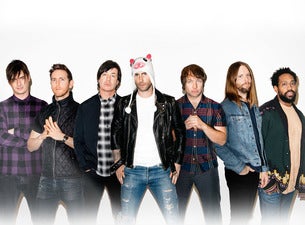 Maroon 5 have released two multi-platinum studio albums (2002's Songs About Jane and 2007's It Won't Be Soon Before Long), scored a string of hit singles ("This Love," "She Will Be Loved," "Harder to Breathe," "Sunday Morning," "Makes Me Wonder"), won three Grammy Awards, and sold 15 million albums around the world. Now the Los Angeles quintet is back with its third-studio album, entitled Hands All Over — a killer hybrid of rock, pop, funk, and R&B, that showcases the band's considerable strengths: buoyant, unforgettable melodies, sleek, stylish grooves, charged lyrics about turbulent relationships, and crisp, dynamic performances.

Adam Levine, the band's lyricist, began writing the songs that appear on Hands All Over after winding down from a world tour in support of It Won't Be Soon Before Long. A few months later, Maroon 5 received a phone call from veteran studio wizard Robert John "Mutt" Lange (AC/DC, Foreigner, The Cars), who had heard that Maroon 5 were beginning to write a new album and expressed an interest in producing it. "We didn't even talk to anyone else," Levine says. "Mutt is undeniably one of the most successful producers who's ever lived."

Levine's first performing experience — in fact the event that ignited his desire to become a singer and musician — actually involves Lange. The story goes like this: 20 years ago, when Levine was 10, he attended a friend's birthday party "at one of those places in the San Fernando Valley where the kids dress up in rock'n'roll gear and lip-sync their favorite songs," he says. Levine chose the Def Leppard classic "Pour Some Sugar On Me." "I knew I could sing because my music teacher told me I had a voice, but I had never really performed before. I grabbed the mic and just went for it. Afterwards I knew that I've got to do this for the rest of my life. That's what got the whole ball rolling for me." The classic anthem "Pour Some Sugar On Me" was, of course, famously produced by Lange. "If that's not a full 360, I don't know what is," Levine says. "It doesn't get more circular than that."

In July 2009, the members of Maroon 5 — Levine, keyboardist Jesse Carmichael, bassist Mickey Madden, guitarist James Valentine, and drummer Matt Flynn — decamped to Lange's studio in Vevey, Switzerland, on the north shore of Lake Geneva where they worked distraction-free with the Swiss Alps looming in the distance. "Just being near those majestic mountains and lakes was so inspiring," says Jesse Carmichael. "Waking up and seeing these giant snow-capped peaks, it set the tone for the record and made the whole thing feel like some sort of magical summer camp experience." Adds Carmichael: "Mutt really helped us play to the best of our ability. And it drove us to be bigger and better than ever. Everything he does is huge."

"Huge" is a good way to describe Hands All Over, starting with the hard-rocking title track that is heavier than anything Maroon 5 has ever done. Says Valentine: "It doesn't sound like anything we've done so far." Another stylistic departure is "Out of Goodbyes," a stunning country ballad that features musical and vocal contributions from Nashville chart-toppers Lady Antebellum. "We've always loved country music," Levine says, "and they brought that necessary twang to it with the lap steels, ambient guitar, and Hillary Scott's pretty country voice." Other highlights include the deeply groovy "Don't Know Much About That," the propulsive "Stutter" ("a great showcase for Adam's voice," Valentine says) and "Misery," which will thrill long-time Maroon 5 fans with its funky guitars and high-stepping melody.

Maroon 5 first hit it big in 2002 with Songs About Jane, which went quadruple platinum and spawned four hit singles: the blockbuster Top 40 No. 1 "This Love," the Top 5 "She Will Be Loved," as well as "Harder to Breathe" and "Sunday Morning." Its success cemented their status as a world-class rock band and led to a 2005 Grammy Award win for "Best New Artist." They followed up Songs About Jane with Acoustic (2004), a collection of unplugged songs, and Live — Friday the 13th (2005), which earned them a second Grammy for "Best Pop Performance by a Duo or Group With Vocal" for the 2006 live recording of "This Love."

In May 2007, Maroon 5 released It Won't Be Soon Before Long, which debuted at No. 1 on the Billboard Top 200 album chart, selling nearly half a million copies its first week of release. The Grammy-nominated album featured several hits, including "If I Never See Your Face Again" and "Makes Me Wonder," which earned Maroon 5 their third Grammy, once again for "Best Pop Performance By A Duo or Group With Vocals." In 2009, they released Call & Response: The Remix Album, an 18-track "mixtape" that featured Pharrell Williams, Mark Ronson, Swizz Beatz, Paul Oakenfold, and many others, putting a new twist on the band's biggest hits. Maroon 5 also collaborated with Rihanna on a Grammy-nominated new version of "If I Never See Your Face Again," which appeared on the re-release of the Barbados-born pop star's 2007 album Good Girl Gone Bad. (Levine has also collaborated with Ying Yang Twins, Kanye West, Alicia Keys, Natasha Bedingfield, and K'naan.)

Along the way, Maroon 5 toured the world, including a sold-out headlining tour of the U.S., during which they partnered with environmental action organization Reverb to reduce their carbon footprint. Known for their commitment to the environment, Maroon 5 also became members of the NRDC (Natural Resources Defense Council) and were honored at the 2006 Environmental Media Awards and have pledged both time and energy toward Global Cool, an initiative launched to fight global warming by motivating a billion people worldwide to reduce their personal energy use.

It won't be any different in 2010 when Maroon 5 release Hands All Over, which is as accessible and broadly appealing as anything the band has ever done, including their breakthrough smash Songs About Jane. "Every record should be like our first, that's the way we think about it," Levine says. "We don't ever want to rest on our laurels or get too cozy. We always want to keep aspiring to do our best — and this album captures that."

Maroon 5 announced dates for their 2020 U.S. tour, marking the biggest U.S. shows of the band's career with the group playing iconic venues such as at Wrigley Field, Fenway Park, Citi Field and Banc of California Stadium. The band's multi-country tour begins May 30, 2020 at North Island Credit Union Amphitheatre in Chula Vista, CA. Leon Bridges appears on all stadium dates. Meghan Trainor appears on all show dates. This follows the debut of their most recent single, "Memories". The release of "Memories" marked the first new music from the Los Angeles band since the release of their global anthem "Girls Like You."