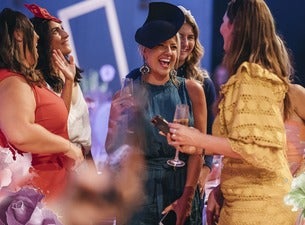 About Melbourne Cup at Crown Ballroom

Crown Perth is thrilled to announce the return of renowned Melbourne Cup celebration, Classique, to the Crown Ballroom this year for a day filled with excitement and extravagance.

Indulge in a spectacular four-course lunch prepared by our award-winning chefs, complemented by flowing French Champagne and premium beverages, all whilst enjoying a high-end runway spectacular and show-stopping entertainment, including the charismatic Rove McManus as your host for the day.

You won’t miss a moment of racing action, with live telecasts of all races on multiple big screens direct from Flemington.

For the biggest Melbourne Cup event in Perth, Classique boasts a lively line up of well-known entertainers and personalities.

Your MC for the day will be none other than three-time Gold Logie recipient Rove McManus. One of Australia’s most loved entertainers, Rove is best known for his career as a stand-up comedian, host of one of Australia’s most successful talk shows and one of the country’s biggest producers of entertainment television. Having played host to some of the planet’s leading names, with the likes of U2, Hugh Jackman, Beyonce, Pink and Elmo, Rove will now create for you a high-energy Cup Day to remember.

Supporting Rove will be Australian singer/songwriter, Bloom, providing show-stopping entertainment throughout the afternoon. Gaining acclaim for her smooth deep vocals and her fresh ambient pop sound, Bloom is highly applauded as one of Australia’s greatest power vocalists with national and international performances to rave reviews under her belt. Having wowed audiences with tributes to Adele, Amy Winehouse and Stevie Nicks, she will have you dancing, singing and reminiscing with her All Star Band in a fabulous show full of hits.

What would Melbourne Cup day be without Fashions on the Field?

9.30am | Fashions on the Field Registration & Judging

This year, the ultimate fashion showcase will be all about you. A nod to the age-old tradition of trackside style, join us in all your finery and embrace the fun of the competition.

There will be some amazing prizes up for grabs. Conditions will apply.

Classique at Crown Ballroom is an 18+ event