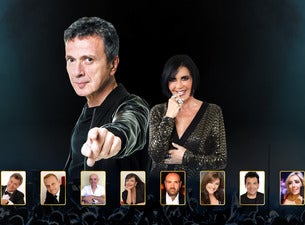 About Memories of Sanremo

The Sanremo Song Festival has captured the hearts of all Italians in Italy and abroad. A catalyst for the Eurovision Song Contest, Sanremo has been a must watch spectacular on the international music calendar for all Italians, and Italians at heart since 1951. The festival is responsible for launching the careers of some of Italy’s greatest singers and went on to become international stars in their own right, including Domenico Modugno, Nilla Pizzi, Albano and Romina, Massimo Ranieri, Toto Cutugno, Eros Ramazotti, Gianni Morandi and Zucchero to name a few. Sanremo has introduced songs that have become anthems to Italians living abroad, touching their souls in times of celebration and need. Who can forget “Volare,” “L’Italiano,” “Che Sara,” and “Rose Rosse.” Ricordi di Sanremo (Memories of Sanremo) will bring back all those memories in a multimedia production led by Italy’s own Pupo. A Sanremo winner himself, he will introduce Australia’s crème del la crème of Italo-Australian singers including Tony Pantano, Giancarlo Nobili, Fiorentino Mannino, Penny Pavlakis, Gaetano Bonfante, Grace Rizzo and Tony and Sara Mazell. Pupo, who will be celebrating 40 years of the hit song “Su Di Noi” will host the event and perform all his hits with his live band.

Joining this extensive list of performers will be special guest, Fiordaliso, nine times participant in Sanremo with hits including “Non Voglio Mica La Luna” and “Oramai.” Ricordi di Sanremo (Memories of Sanremo) is a must-see concert for all lovers of the great and unforgettable melodies that make up the great Italian songbook.