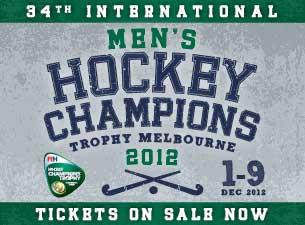 As the first major international Men’s event after the exhilarating London 2012 Olympic Games, the Hockey Champions Trophy 2012 will provide spectators the opportunity of seeing the best teams in the world compete against each other. The countries that will take part include Australia, Belgium, England, Germany, India, Netherlands, New Zealand and Pakistan.

Considered to be one of the leading sporting and event cities in the world, Melbourne is recognised for the high standard of international events it has hosted.

The Hockey Champions Trophy 2012 is the last annual edition of the tournament, shifting to a biennial event, given the impeding introduction of the FIH World League scheduled for 2013.

So get in quick, get your tickets now and come join hockey enthusiasts & fans from across Australia and abroad enjoying a world-class experience amongst the action at the Men’s Hockey Champions Trophy Melbourne 2012. Experience Hockey, It's Simply Brilliant.

Hockey Champions Trophy 2012 will be held in Melbourne, Australia from December 1-9 2012. The tournament will be played at the State Netball Hockey Centre, the same venue that hosted the very successful 2009 edition.