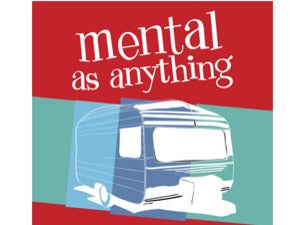 Mental As Anything Tickets

Mental As Anything started off as students who put a band together to play blues, sixties pop, rockabilly, country and

increasingly their own original compositions to fill in time at art school in Sydney Australia in the mid 1970s. Initially

playing to students at parties, pubs and Uni dances they caught the attention of new independent label Regular

Your Party" with one track: "The Nips Are Getting Bigger" on everyone's radio over Christmas.

In 1979 the song became the band's first nationwide hit on Festival Records. The LP "Get Wet" is released and what

follows is a solid stream of hit records through the 1980s and into the 1990s: "Come Around", "Just Like Romeo And

You", "The World Seems Difficult", "Rock 'n' Roll Music" and "Mr Natural" were ALL in the Australian Top 30.

late 1970s honing the craft of performing their songs live and perfecting the art of just being Mental.

At one time Mentals held the record for most Top 40 hits in Australia by Australians.

The original video clip for the Mentals' "Lets Cook" was exhibited in the New York Museum of Modern Art.

Elvis Costello produced "I Didn't Mean To Be Mean" for the Mentals.

The Mentals painted and illustrated a tram that operated around Melbourne Australia for several years.

baths. Doing this while singing with the band.

Mentals staged three group art exhibitions between 1982 and 1999. The last two of which were opened by future

and past Australian Prime Ministers: Paul Keating and Gough Whitlam.

Mental As Anything have sold more records in Germany than Australia.

Mental As Anything had their first overseas hit in 1981 with "Too Many Times" reaching 19 on the Canadian charts.

"Live It Up" was kept out of the number one spot in the UK by two releases of old hits being used in TV ads for jeans!