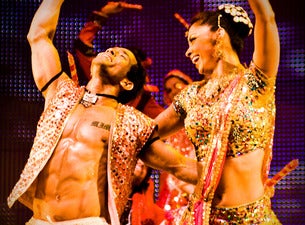 About Merchants Of Bollywood

"The Merchants of Bollywood"

The International smash hit returns to Australian stages after it's triumphant World tour.

The glamour and glitter that is Bollywood returns to the Australian stages in 2018 following its worldwide success and rave reviews. "The Merchants of Bollywood" features a cast of more than 30 performers direct from Film City Mumbai – the home of Bollywood Cinema. The upcoming Theatrical event is scheduled for October/ November 2018 - tour dates to be announced in ensuing weeks by Executive Producer and Creative Director Mark Brady.

“Since launching 'The Merchants of Bollywood’ fifteen years ago the show has had worldwide success playing to more than 3 million patrons, 4 sold out London shows followed by sell-out performances in the U.S, Europe and South East Asia”, Mark Brady said. “Finally we are bring the production back to Australia and very excited to present in all major capital cities. The glitz, glamour, sheer spectacle, song, dance and romance that we know as ‘Bollywood'. Bangles and beads, swirling colours in costumes and sets, and high-energy music, will excite the senses in this lavish new production that is bigger, bolder, brighter and features all the smash hit songs from the biggest Bollywood blockbusters".

**** Stars from The Times, London: “Their energy is electrifying, their movements suffused with a rush of joy and yet ruthlessly precise and the frenetic flow of onstage activity is almost non-stop. It's a high octane pleasure!”

A theatrical dance spectacular, "The Merchants of Bollywood" charts the enchanting history of the world’s largest and most prolific film industry, and a dynasty of stars that have lit its way over generations. "The Merchants of Bollywood" transcends time and is a touching tribute to the Bollywood greats of yesterday and the box-office hits of today complimented by the outstanding music arrangements by Salim-Sulaiman.

A fictional story, yet based on real life, "The Merchants of Bollywood" will reveal to the Western audience the workings of cinema and the part it plays in the heart and soul of Indian society in an extraordinary evening of music and dance at the heart of which lies a heartfelt story of a young girl, her grandfather and their love of dance.

"The Merchants of Bollywood" has captured the essence of India, its rich and diverse culture, and its people in a world of technicolour brilliance acclaimed by patrons and reviewers alike.