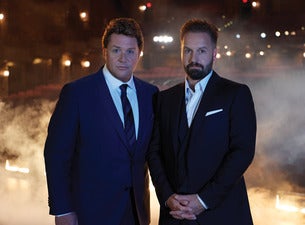 About Michael Ball and Alfie Boe

Two of the greatest voices in the world, Michael Ball and Alfie Boe, have received countless prestigious awards, record-breaking sales and chart successes. Now they bring their Together tour to Australia this October.

Over his extraordinary 30-year career, Michael Ball’s outstanding performances have made smash-hit box office history. He is a double Olivier Award winner, multi-platinum recording artist, top selling live concert performer and a hugely popular radio and TV presenter.  Alfie Boe’s exceptional voice has made him Britain’s most popular and biggest-selling tenor.  The Tony Award winner has conquered the world’s greatest opera stages and arenas, led the cast of Les Misérables, stole the show at the Queen’s Diamond Jubilee Concert at Buckingham Palace – and performed at the Queen’s 90th birthday celebrations at Windsor Castle.

The relationship between Ball and Boe began ten years ago after performing in Kismet at the London Coliseum. It was then that Michael Ball made history as the first musical theatre star to be given a solo concert at the BBC Proms, and asked Alfie Boe to join him. Their instant camaraderie and professional mutual admiration made for the perfect pairing and, to the delight of their hundreds of thousands of fans across the globe, came to fruition with the top selling album and tour, Together - testament to the popularity and talent of the UK’s finest voices.

Together features a cherry-picked repertoire of personal favourites from film and stage shows including a Les Miserables medley, ‘Somewhere’, ‘You’ll Never Walk Alone’, ‘Speak Softly Love’ (theme from The Godfather), ‘For Once in My Life’ and more.