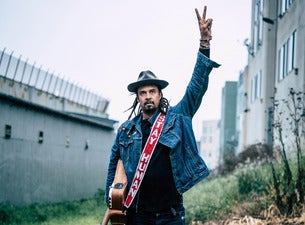 Rock/hip hop fusion outfit Michael Franti & Spearhead continue to bring the good vibes, putting a new twist on touring with their combination music-and-yoga Soulshine Tour 2014. The energetic performer has made a career out of lifting people's spirits through music, and by adding a yoga session to his concerts he's taken the live experience to a new spiritual plane.  Franti is a true showman, and whether he's leading fans through a series of vinyasas or performing favorites like "Stay Human", he creates a mood of love and acceptance at his concerts that make them a truly unforgettable experience.

Oakland-born Michael Franti developed a passion for music and poetry while attending the University of San Francisco. He got his start as a musician in the mid-'80s with the spoken word group the Beatnigs, achieving local notoriety with the project before starting the Disposable Heroes of Hiphoprisy in 1991. The Disposable Heroes' unique fusion of industrial music and hip hop was a hit with critics -- even attracting the attention of U2's Bono, who invited Franti and Co. to join the iconic band's 1992 Zoo TV Tour. Franti's most enduring success was Spearhead, a reggae and funk-influenced fusion band he formed in 1994 with several studio musicians. Beginning with their full-length debut album Home, Michael Franti & Spearhead released a string of empowering, celebratory albums that were accompanied by uplifting concert tours. While Franti has had his brushes with commercial success, including the Top 20 single "Say Hey (I Love You)" in 2008, his real success has been in his ability to build community and dialog around his music. Franti once again delighted fans in 2014 with the announcement of the Soulshine Tour, which incorporates healing yoga sessions into his musical sets.

"Michael comes on stage with his guitar and introduces his yoga teacher, a woman from Hawaii. Michael plays while she leads us in yoga poses-- and every once in a while we all break out dancing!"

"It was an awesome performance. So much love and positivity shared throughout the event. Loved how he interacted w/ the audience (running & dancing in the aisles & just plain talking to the audience.)"

"If you have never been to a Franti show - go. Go and see the energy, the fun, and the smiles that are on the faces of every single audience member."