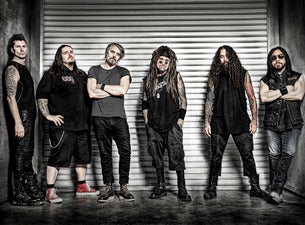 Legendary industrial metal outfit Ministry has been shaking fans to the core with their bone-crushing live shows for more than three decades, and their upcoming tour dates may be the final chance to see them in action. Longtime Ministry guitarist Mike Scaccia died of a heart attack in 2012, prompting frontman  Al Jourgensen to declare that the band's 2013 album From Beer to Eternity and accompanying tour would be their last. It's a bittersweet moment for fans -- they get to see the Jourgensen and company let it all hang out on their historic farewell tour dates, but it's also the end of an era. The bland plans to honor their legacy and Scaccia's life by doing what they do best -- delivering ferocious, decibel-shattering performances packed with industrial metal classics like "Stigmata" and "Jesus Built My Hotrod".

Ministry formed in Chicago in 1981 and spent the better half of the decade turning out dark synthpop that earned them a huge underground following. By the mid-'80s the band had reached the peak of their early incarnation with albums like Twitch (1985) and The Land of Rape and Honey (1988) -- two cult classics still heard in alternative dance clubs. Towards the end of the '80s frontman Al Jourgensen was incorporating increasingly aggressive elements into the band's music including jackhammers and  heavily distorted guitar, and by the early '90s Ministry's sound had evolved into full-fledged industrial metal. The band's 1991 album Psalm 69: The Way to Succeed and the Way to Suck Eggs marked a high point, topping Billboard's Heatseekers chart and receiving heavy MTV airplay with the single "Jesus Built My Hotrod". Since then the band has remained an industrial metal powerhouse, releasing eight hard-hitting albums including 2013's From Beer to Eternity -- their final release as Ministry. On their farewell tour dates in support of the album, the band will slay ticket buyers to career-spanning sets celebrating more than three decades of genre-defining music.