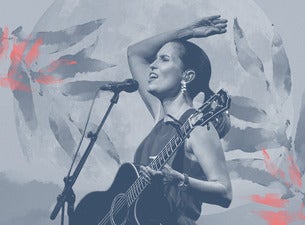 Joining Missy Higgins for the experience will be the ever-ascendant Meg Mac and acclaimed new talent, Didirri.

This show marks a special return to Kings Park & Botanic Garden for Missy. In February of this year she was supporting good friends the John Butler Trio for two special shows, but on night #2 fell ill and wasn’t able to take the stage. This newly announced event is Missy’s way of thanking her fans for their patience and support as well as shining a light on two other great Australian artists.

It’s been an incredible 18 months for Missy, kicking off with a national support for Ed Sheeran’s ÷ Tour in March 2018. The tour was the largest series of concerts in Australian history with nearly 1 million tickets sold and proved to be a grand curtain-raiser for the subsequent release of her fifth studio album, ‘Solastalgia’, a few months later. The lead single, ‘Futon Couch’, became Missy’s biggest radio success in a decade.

Missy Higgins capped off 2018 with the release of ‘The Special Ones’ – a Best Of Collection that is a primer to one of Australian music’s strongest modern catalogues. Consider that ‘The Sound Of White’ (ARIA Album Of The Year featuring the hits ‘Scar’, ’Ten Days’ and ’The Special Two’), ‘On A Clear Night’ (featuring North American top 20 airplay hit ‘Where I Stood’ plus Australian #1 single ‘Steer’), ‘The Ol’ Razzle Dazzle’ (featuring ‘Everyone’s Waiting’ and ‘Hello Hello’) and Missy’s covers album/book ‘Oz’ have sold over two million copies globally, it’s easy to see why Missy Higgins has long remained – and continues to be – one of our country’s most acclaimed and popular artists.

Australian singer/songwriter Meg Mac may come across as quiet and unassuming, but her voice and her words loom powerfully and more confidently than ever on her second album, ‘Hope’.

Since being named triple j’s Unearthed Artist Of The Year in 2014, Meg Mac’s career has soared to ever-increasing heights. Her first release, 2015’s platinum-selling ‘Never Be’ EP, was followed two years later by the debut LP, ‘Low Blows’, which landed at #2 on the Australian ARIA Album Chart. Her single, ‘Roll Up Your Sleeves’, has now hit 20-million streams on Spotify.

2019 again finds Meg Mac in a place and a moment of reflection, but one tethered by the moods, events and travails of the world as she sees and experiences them. ‘Hope’, is a product of the times and her place in them.

“The songs on the record are influenced and informed by what is happening around me at the time of writing,” Meg says. “Music is always filtering through and though not directly influencing the songs, somehow informing them.

“I’m always changing. My inspiration is always coming from around me, what I’m listening to, the people I’m around, all the experiences. It always starts with the song. Singing at the piano is where everything comes from.”

In 2019 Meg Mac played sold-out shows in America, Europe and the UK followed by a sold-out ‘Give Me My Name Back’ Australian tour.

“My voice is who I am more than I can ever be,” Meg says. “It’s when I can be free. I can say what I want and how I want when I sing. It’s the only way I’ve figured out how to be myself. Performing live is the best part of what I do – when I can get on stage and simply sing.”

Describing his music as being “for lovers and overthinkers” Didirri's challenging and thoughtful writing, combined with on-stage charisma and relatable depth has continually won over listeners around the world. Simultaneously heartbreaking and healing, and approaching real issues with smile and charm, Didirri is an artist with something to say. His uninhibited lyrics tug at raw nerves, while his charming melodies soothe your heart - all at once provoking a wild thought and calming your heady mind.

Didirri’s warmly received 2017 debut EP, ‘Measurements’, was followed up recently with a mysteriously enticing new single, ‘Tea Stains’, a collaboration with Melbourne-based art-pop-indie songwriter, Ro. The good news is that it’s not the only new music we’ll be hearing from him in 2019.

Missy Higgins, Meg Mac and Didirri – so many memories and many more new ones to make on a perfect summer’s night in Kings Park & Botanic Garden. Tickets simply will not last.