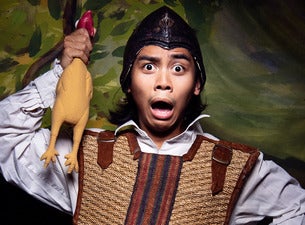 Books and Lyrics by Eric Idle

Lovingly ripped off from the classic film comedy Monty Python and the Holy Grail, Spamalot retells the legend of King Arthur and his Knights of the Round Table. Guided by the fabulous belting diva The Lady of the Lake, a diverse, cross-gender cast of heroic/foolish actors (and their assistant stage manager) battle their way past various cows, killer rabbits, and French people in pursuit of claiming the legendary Grail.

Monty Python’s Spamalot was a smash hit in both New York and London and won the Tony Award for Best Musical. Now comes a production that re-defines the word ‘epic’. Really, really re-defines it.

The team behind 2018’s smash hit Calamity Jane bring their anarchic, immersive storytelling style to ancient England, embracing the satirical, home-made spirit of the original movie and the Monty Python TV series. This production was a sell-out phenomenon in Sydney in 2019, so don’t miss out!

Book onstage seating to be a part of the action!