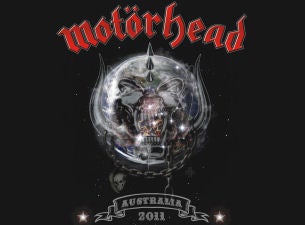 Motörhead
"Everything Louder Than Everything Else"

"Lemmy is a God. He is the reason. He is the last man standing and no one comes close"
- Dave Grohl

Motörhead return to Australia to raise hell in the service of rock ‘n roll in 2011.

Motörhead play - correction - Motörhead ARE loud, fast, dirty, bluesy rock ‘n roll with an unrivaled, ruthless attitude; obnoxious yet dignified. For over 35 years the band has maintained their strong hold as a force of unrelenting sonic power, pounding their music into the ear drums of audiences all over the world; reducing the masses into exhausted, sweat soaked, tinnitus-suffering submission, and leaving them begging for more.

The band has uniquely pioneered both heavy metal and punk rock, and is revered by aficionados of both genres.  Theirs is a sound and a way of being that sees their fan base continue to grow year after year, and that has rightfully solidified Motörhead as living legends of hard rock.

Motörhead is personified by the gravel-laden vocals, phenomenally articulate lyrics and rumbling bass playing of Lemmy. From his days as a roadie for the Jimi Hendrix Experience to playing bass in ‘70s psychedelic rock band Hawkwind, to forming Motörhead, Lemmy has mowed his own path, defying odds, balking stereotypes and ignoring fashions, fads and trends.  Of him, ex- Guns ‘N Roses guitarist, Slash (who played on Motörhead's 1992 album, "March or Die") says, "Lemmy's like one of my all-time f*****g heroes... I really appreciate everything about him".

Phil Campbell joined Motörhead in 1984 and has weathered the band's transformations from a duel guitar line-up, back to its original trio configuration where it has remained since 1994.   Discussing the band's longevity, Campbell remarked "We don't care about musical trends; we just look after Motörhead....Sometimes I think it's a life sentence but if I didn't enjoy it I wouldn't still be doing it.''

Swedish drummer Mikkey Dee first made a name for himself with King Diamond in the 1980s. Dee's drums on the first four King Diamond records are widely considered to be among the finest drumming performances in the history of heavy metal. Lemmy had been asking Mikkey to join Motörhead repeatedly from 1985 until Dee finally accepted in 1992. In an interview in 1994 Lemmy stated, "Mikkey Dee, in a way, saved us, because he is the best drummer that we've ever had. He's excellent."

To their fans, Motörhead are the unholy trinity, more worthy of worship than any religious icon.  Kim Thore (All Access Magazine) described the fans outside a recent Motörhead concert; "these were followers; rock ‘n roll Pilgrims at the Mecca of Motörhead."  It's a scene that's sure to be replicated in Australia as Motörhead crusaders turn out in their masses to witness the return of their rock ‘n roll prophets.

Forget your bibles.  Bring your earplugs.  This communion is sure to be sacrilege.