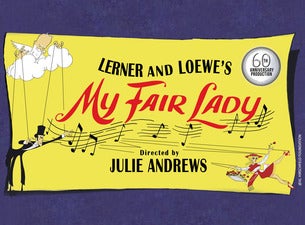 About My Fair Lady

Last chance to see the magnificent My Fair Lady now playing at the Capitol Theatre Sydney only until 14 October, under the direction of Julie Andrews.

Opera Australia and John Frost take pride in presenting the beloved story of Eliza Doolittle and Henry Higgins to a new generation of theatre audiences.

My Fair Lady is an endearing tale that charms audiences with its warmth and vivid characters.  The clash of cultures sparks some of musical theatre’s most witty dialogue and jubilant songs including Wouldn’t It Be Loverly?, On The Street Where You Live, I Could Have Danced All Night  and Get Me to the Church on Time.

Don’t miss the musical hailed by The Australian as ‘Miraculous. Ridiculously Beautiful’, about the Cockney flower girl Eliza Doolittle and the appealingly arrogant phoneticist, Henry Higgins.