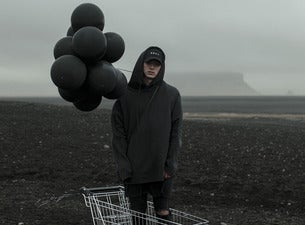 Following a sold out North American tour, US rapper NF has announced the expansion of his current world tour “The Search Tour” with a run of Australian shows. Described as “a rapper who’s here to unpack his guilt and regret in rapid-fire lyrical outbursts,” (Stereogum), the tourwill begin at Melbourne’s iconic Forum Theatre on February 1 before heading to The Tivoli in Brisbane on February 5.

Operating from outside of the system and against all odds, NF quietly and unassumingly ascended to the forefront of  modern  hip-hop  on  his  own  terms.  His  independently  released “Perception” album  shocked  the  industry by debuting at #1 on the Billboard200 and shone a light on a fervent fan-driven movement surrounding the artist. It also bowed at #1 on the Top Rap Albums and Top R&B/Hip-Hop Albums charts. It was the ultimate underdog story of  2017,  as  chronicled  by The  New  York  Times, Rolling  Stone and Forbes, with the latter noting, “NF’s success speaks to what can be done these days outside of the traditional system.”

Now certified Platinum in the U.S., “Perception” has earned more than two million album equivalent units worldwide while cumulative streams have surpassed 3.5 billion. Singles like ‘Let You Down’ – 5 x Platinum in Australia, 3x Platinum and a #1 Pop radio hit in the U.S., and certified Platinum or higher in six additional countries – ‘Lie’ and ‘If You Want Love’ further expanded NF’s fanbase, paving the way for his sold-out, 87-date 2018 Perception World Tour of North America and Europe, numerous festival appearances and the direct support slot on Logic’s “Bobby Tarantino Vs Everybody” arena tour.

All of this has set the stage for his Australian debut which is anticipated to be nothing short of epic.