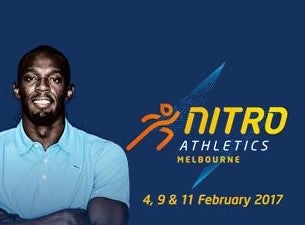 In a world first, Usain Bolt and athletes from the around the globe will unite in Melbourne, Australia in February to transform athletics as we know it.

Nitro Athletics Melbourne will provide three nights of blockbuster entertainment at Melbourne’s Lakeside Stadium that is electrifying, affordable and fun for all.

With Melbourne at the heart of the Nitro Athletics phenomenon, a number of international mixed teams will combine collaboration and contest with brute force.
Teams include Australia, Bolt All-Stars, China, Japan, England and New Zealand.
The Nine-time Olympic gold medallist and 100m and 200m world record holder Usain Bolt will compete for the first time in Australia as captain of the Bolt All Stars.
Nitro Athletics Melbourne focuses on providing the most challenging and engaging fusion of discipline, technique and teamwork by adding a Nitro spark to traditional athletic events.
Athletes will be forced to apply tactics and strategy in sprint, distance, field and para-athletic events.
The schedule will also include live entertainment to engage audiences throughout the night, guaranteeing a thrilling experience for all families and sports lovers.

Tickets go on sale to the public on Friday, December 9 via Ticketmaster.

Family packages are available for two adults and two children.

Be part of history in the making as Usain Bolt and marquee international athletes ignite Melbourne this February.