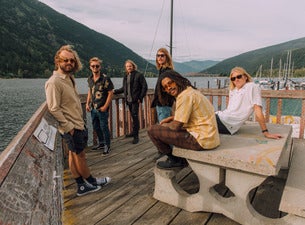 It's been a long time between local headline gigs, with the upcoming tour marking three years since Ocean Alley's last capital city run, and two years since their last coastal dates. Across both tours, they sold out 15 shows including two nights in Sydney and Melbourne at Enmore Theatre and The Forum respectively. Those dates were in support of their then newly-released second album, the critically-acclaimed Chiaroscuro, and since 2019 the band have been writing and recording new music, with three singles released since - Stained Glass, Infinity and Tombstone - the first two eligible for the triple j Hottest 100 of 2019, charting at #54 and #24.

Launching into the new decade, Ocean Alley are fresh off the national Laneway Festival run and a stint in New Zealand over the New Year period, however 2019 ended with 30 sold out performances around the world after playing their biggest international shows to date. The band gave a career-defining, Saturday night main stage performance at Splendour In The Grass and were widely-praised for electric and commanding sets at Bluesfest, One Night Stand, Spilt Milk, Land Of Plenty and the sold out, inaugural A Day For The Beaches: a community event they curated on the Northern Beaches to raise money for local charities. To round out their breakthrough year, smash hit single and #1 Hottest 100 of 2018 'Confidence' saw the band receive their first ARIA nomination for Song of the Year, with stand-out moments from that 12 month journey chronicled in the new Tombstone video.

Hailing from's Northern Beaches, Ocean Alley have solidified their position as one of Australia's most exciting bands. Having surpassed 200 million catalogue streams, as well as achieving the impressive feat of attaining more than 1.5 million monthly Spotify listeners, Ocean Alley continue to captivate audiences worldwide with their infectious blend of psychedelic surf-rock, selling out a slew of shows at home and abroad, plus performing festivals including Falls Festival (AU), Reading & Leeds Festival (UK), BottleRock (US), Sziget (HU) and Bay Dreams (NZ).