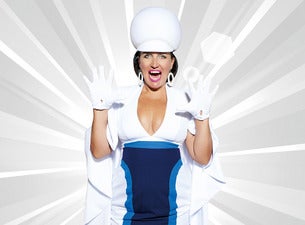 Have you ever dreamt of becoming a flight attendant, traveling the world and telling passengers to f**k off?  Then this is the show for you! Pam Ann, undisputedly the world’s most experienced air hostess, is searching for her Flight Attendant Star and will select air hostie wannabes from the audience and put them through a series of challenges to see if they have what it takes. Get yourself a ticket, dress up in your flight attendant finery* and pack your Gucci carry on for the chance to be showered with glory and crowned Pam Ann’s Flight Attendant Star – your dream job with no experience required!

On returning to Australia Pam Ann says “Look out, Bitches! My Xanax script has been filled and I am ready to make that horrific flight down under! It’ll be first class all the way – I’m not going anywhere near those inbreds in economy And I will be bypassing Hobart – hot Australian’s only for my next Flight Attendant Star. See you in the cock pit!”

Pam Ann is the alter-ego of Melbourne-born comedian, writer and producer Caroline Reid. World-renowned for her lewd and acerbic airline satire, Ann regularly sells out shows in Europe, North America, Asia and Australia. She was once recruited by Elton John to perform on his private jet and counts Madonna and Cher as some of her fans.

In Australia, Pam Ann has a cult following, having previously starred in her own Foxtel TV show 'The Pam Ann Show' and hosted Australia’s live broadcast of the Mardi Gras. This year Pam Ann was nominated for the Australian LQBTI Celebrity Award alongside Magda Szubanski, Ruby Rose and Josh Thomas.

*ticket buyers who can’t be bothered making an effort can still join in the fun of Pam Ann Airlines – the world’s most experienced airline, one that never makes the same mistake more than three times…maybe four!

‘Not since Dame Edna have we seen such a sassy performer’, Elle Magazine UK

‘A delicious comic creation’, The Independent

‘Comedy of the highest order’, Mail on Sunday