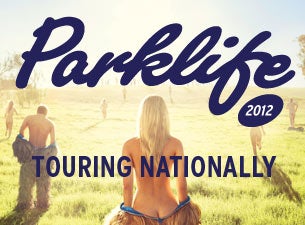 The wait is over! The end of hibernation is in sight as Australia's premier touring festival, Parklife, has revealed its 2012 line-up, which is guaranteed to make music heads buzz and make dancing feet jump in excitement!

Set in the most beautiful green parklands that Brisbane, Sydney, Perth, Melbourne and Adelaide have on offer, Parklife welcomes us all into Spring/Summer 2012 with open arms, brand new music, treasured tunes and a collective record bag full of surprises. If you prize great music as much as your party surroundings, Parklife 2012 will blow your mind.

Parklife 2012 premieres the long awaited return of Australian electronic royalty The Presets. Armed with a new anthem "Youth In Trouble", a new album (released September 2012) and a brand new live show, The Presets' return will be massive, bold and electrifying on the Parklife stage. Over in Perth, Psychedelic rockers, Tame Impala have a brand new album in the works to follow their massive debut LP ‘Innerspeaker', while Sydney ‘s Hermitude will showcase their hip-hop stylings to Parklife audiences.

Expect big things from electro-pop outfit Passion Pit when they return to our shores with their infectious sound and the release of their highly anticipated sophomore album ‘Gossamer' (20th July 2012). Their fellow American indie darlings Chairlift, and hip-hop favourites Chiddy Bang join the line-up.

He's taken the world by storm and has fans by the millions; Plan B will unveil his new record ‘iLL Manners' (20th July 2012) and accompanying film by the same name (released Spring 2012), just in time for his Parklife debut. Accompanying him from the UK include hip-hop/grime pioneer Wiley and up and coming recording artists Labrinth and Charli XCX. Plus you can't go past the legendary producer and DJ Jacques Lu Cont.

Legendary French duo, Justice will play their acclaimed DJ set, while in Sweden the electro pop Queen, Robyn prepares her return to Australia after a three year absence.

For fans of bass music from Dubstep to Drum & Bass to Grime, Parklife this year is the ultimate one stop shop: DJ Fresh will be bringing a full LIVE band to the stage in the wake of his massive #1 hit ‘Hot Right Now' (the first ever DnB track to reach #1 on the UK charts) and NERO are bringing their LIVE show to celebrate debut album ‘Welcome Reality' reaching platinum in Australia. Add Rusko, Benga live, Modestep, Jack Beats & more and it's the biggest dubstep line-up ever to tour Australia.

From electro to indie-pop to dubstep to hip-hop to house, there's something for all kinds of music heads & dancing feet at this year's Parklife.

"We've picked a whole bunch of artists that we really love, some being long time favourites and some being the fresh crop of 2012 up and comers we think deserve superstardom. Almost all of them have new albums and singles this year, so I can't wait to see all the new stuff live... Oh and shhhh: no so-called "EDM" auto-tune vocals..."

In 2000, Parklife became the first dance music event to be held in Centennial Park in Sydney. Today, the festival tours nationally and has over 100,000 attendees.

So, gather the crew, pack some sunscreen, put on your dancing shoes and your best smile; you don't want to miss a beat (pun intended) at Parklife 2012.