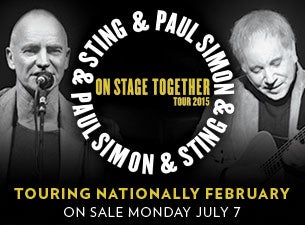 Live Nation Global Touring announced today that Sting & Paul Simon, two of music’s most renowned and enduring artists, will bring their critically-acclaimed On Stage Together tour to Australia and New Zealand in January and February 2015.

As long-time friends, the concept for the “On Stage Together” tour originated at the Robin Hood Foundation benefit in 2013 where they performed together for the first time. Both artists, who are known for exploring world rhythms, have pushed the boundaries of popular music and continue to speak to generations of fans.

As exemplified on their North American tour earlier this year, the concerts in Australia and New Zealand will feature two of music’s most iconic singer/songwriters blending their voices and their bands while performing their best-known songs both together and apart.

In what was one of the most highly-praised North American concert tours of 2014, media and fans alike were unanimous in their reviews.

“One of the most surprising, daring, and rewarding double bills…” - Hollywood Reporter

“...great melding of music by two of the world’s finest songwriters and singers.” - American Songwriter

“We are thrilled to be bringing the tour to Australia and New Zealand,” said Arthur Fogel, President - Global Touring and Chairman - Global Music, Live Nation.  “The run in North America this year was an incredible success on all levels. These two legendary talents delivered an unforgettable night of music.”