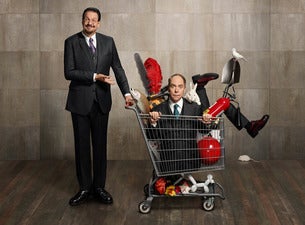 Get ready to have your mind completely blown! The world’s most legendary magicians bring their record-breaking Las Vegas show to Sydney for their Australian premiere.

The stars of the hit TV series Fool Us have earnt a reputation as magic legends performing conjuring acts that are daring, provocative and hilarious. Penn makes all the noise, and Teller is silent, and together their live show has struck the perfect balance between unconventional magic and trickery; outlandish comedy and bumbling blunders. Whether it be stabbing and shooting each other, running amok with tractor-trailers, or catching bullets in their mouths, you’ll need to keep your eye on these flesh and blood tricksters!

This dynamic duo has had sold-out tours around the world, Emmy® winning TV specials, and hundreds of outrageous appearances on everything from Fallon to Friends, The Simpsons to Colbert, earning them a star on the Hollywood Walk of Fame.

Step into their world of magic, and let these masterful magicians teach you a trick or two.