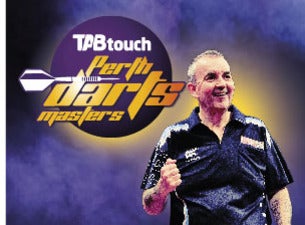 They’re Baaaaacck again! And back to HBF Stadium. Once again the sounds of “one hundred and eighty” will ring through the stadium combined with the unbridled singing and chanting as the fans in all their variety of costumes enjoy Perth’s biggest party.

And once in a lifetime you get the chance to farewell a legend.

Perth it is your chance …The one, the only Phil “The Power” Taylor will be headlining TABtouch Perth Darts Masters in its return to HBF Stadium after announcing this will be his last full season in the PDC.

Your chance again to see the best players from the PDC and to farewell the greatest Darts player the world has ever known and a chance to see him in the flesh one last time.