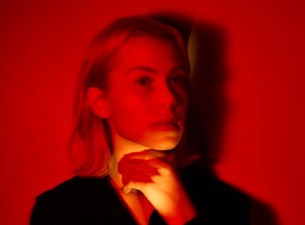 Phoebe Bridgers' moody, angelic mix of folk and indie-pop disguises her youthful spirit — which makes her music and onstage presence every bit more charming. The Los Angeles, California-based singer-songwriter has long known her fate as a musician. She first picked up the guitar at age 12 and soon began honing her chops at the Americana music series in Los Angeles, called The Grand Ole Echo. She would even busk at the Pasadena farmers' market to earn some extra cash. As a teenager, she attended the Los Angeles County High School for the Arts, where she studied vocal jazz and connected with other promising artists and musicians.

After graduating, she spent much of her time around L.A., performing solo and playing bass in the punk band Sloppy Jane. Soon, she began landing roles on various commercials, starting with an iPhone ad in which she covers Pixies' "Gigantic." But it wasn't until she met indie star Ryan Adams, as well as veteran producer Tony Berg, that her solo career began to fully form. In 2015, Adams would produce her debut EP Killer and release it on his own Pax-Am label. The following year, she went on tour supporting artists like Julien Baker and the Violent Femmes.

By 2017, she signed to the indie record label Dead Oceans, who released her much-anticipated debut album, Stranger in the Alps, in September. The album, featuring one of her biggest influences — Conor Oberst on "Would You Rather" — came with rave reviews, and led her on her first headlining tour around the U.S. in early 2018.

Later that year, she'd focus on some key collaborations. Bridgers appeared on the soundtrack for the second season of the Netflix show 13 Reasons Why alongside Lord Huron on a remake of his track "The Night We Met." She also joined up with former tourmate Julien Baker and fellow singer-songwriter Lucy Dacus to form indie rock group boygenius. The band came together to write and record their debut self-titled EP, all in under a week. This quickly led to a well-received tour featuring all three artists, co-headlined by Bridgers and Baker with Dacus supporting. In early 2019, she unveiled a new group (and debut album) from Better Oblivion Community Center, a collaborative duo with Oberst.